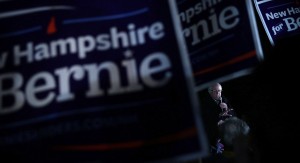 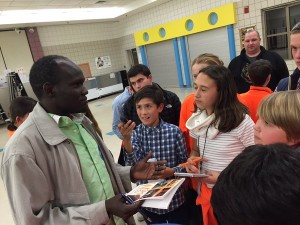 The Iowa Caucuses provided us with profound insights into our democratic process and the importance of civic engagement. Many of us marveled at having front row seats to “democracy in action” and caucus night was heralded as a sacred ritual in which we would celebrate our fellow citizens’ right to vote. But we all also knew the complicated history of voting rights in our nation.

In order to help the students understand the importance and larger context of what they were about to witness – after all, it’s rare to witness actual voting since Americans typically use a secret ballot – we designed a powerful,  interactive exercise on the evolution of voting rights in the United States.  Civil rights historian Daniel McGuire’s lesson emphasized that the right to vote was not a birth right for many groups (non-landowning men, women, African Americans)  and that citizens must cherish and protect this painfully acquired right. Our main point was that both in the context of US history and world history, voting rights, free speech, and a peaceful political process are not the norm and must never be taken for granted. Our students’ strong grasp of the civil rights movement (from their studies in the fifth grade at Carlthorp School), as well as a special and unanticipated encounter that evening, helped underscore this point.

At the Jordan Creek School caucus that KidUnity attended, we watched voters separate themselves in the room based on which candidate they supported. At the conclusion of this sorting and counting process, individuals from the two sides – Clinton and Sanders – were then selected to represent their candidates as delegates at Iowa’s state convention.

One man who stepped forward to be chosen as a delegate had a remarkable story. He introduced himself to his fellow caucus attendees as one of the “lost boys” from Sudan.  He explained that many of his friends had been killed by civil war, disease, and famine, that he had been separated from his family for twenty-three years, and that he had been forced to join an army at the age of thirteen. Now he was a father of a second grader, a student of environmental science, and an American citizen. That night – before our eyes – he became a delegate for Bernie Sanders.

Of all of the remarkable people we encountered on this trip, this man had the most powerful impact on me.

Today we discussed how the Iowa Electronic Markets (A group of real-money prediction markets/futures markets operated by the University of Iowa Tippie College of Business. and run for educational and research purposes) have been extremely accurate in predicting political elections.

Based on our research, KidUnity will be investing in three candidates in the 2016 U.S. Presidential Nominations Markets. (This market is focused on predicting which candidate will get his/her party’s nomination.)

We have decided to divide our investment equally between Clinton, Trump, and Sanders. Rubio will get the remaining 1%.

We have decided that we will sell our shares after the Iowa Caucuses.

By the 6th Grade Students in KidUnity

KidUnity sixth graders have been studying the 2016 presidential election in preparation for a trip to the Iowa Caucuses. On Saturday, January 30 KidUnity will travel to Des Moines and spend three days witnessing and participating in this historic event as student journalists.

To prepare for our exciting trip we have attended amazing workshops that have included meetings with Gov. Michael Dukakis (Democratic Presidential candidate in 1988) and Jessica Yellin (former CNN White House correspondent). We have held straw polls, researched issues, and created committees to plan all aspects of our trip. We cannot wait to get there this Saturday!

In Iowa we hope to interview presidential candidates and possibly even the future President.  We will meet with journalists and elected officials. KidUnity also will attend the Caucuses and participate in some fun festivities at the same time.

These Caucuses are important because they provide a hint of what will come in this presidential election year. Iowa is the first state to vote, is the first test for the candidates, and gets the most attention in the presidential process. Our coverage of this event as student journalists is crucial because there is so much propaganda in politics and a too many voters are not well educated about the candidates and their policies. Our sixth grade is the next generation of voters and we want to be as educated and involved as possible.  As first-hand observers –  interviewing the candidates, Iowans, journalists, and local politicians – we will have a great experience and become good citizens. KidUnity is building community!  We hope you will follow us in Iowa at our blog (kidunity.edublogs.org.) or on twitter (@kidunity).

“The share of Americans identifying as Democrats dropped to a record low in 2015, according to the latest Gallup results published Monday, in the latest indication that Americans’ attachment to either political party is at or nearing historical lows.

Overall, 42 percent over the course of the past year identified as independents, a slight drop from the 43 percent who identified as such in 2014. While Democrats maintained a small advantage over Republicans — 29 percent to 26 percent — the Democratic share is at its lowest in Gallup history.”
Read more: http://www.politico.com/story/2016/01/poll-political-party-identify-217562#ixzz3wxtxwiWF

“Three weeks until the first presidential nominating contest, Donald Trump and Ted Cruz are running neck and neck in Iowa, while Hillary Clinton and Bernie Sanders are also locked in a tight race in the Hawkeye State.

What’s more, Clinton and Sanders are within the margin of error in New Hampshire, while Trump has built a 16-point lead in the same state.” (NBC News)

On Monday the KidUnity Iowa team will meet with Mike Dukakis. They are a little familiar with his failed campaign but I am hoping that they will sit down and watch this documentary – Above the Fray

“he seemed like a man genetically incapable of mounting a defense and engaging in a political fight.  It wasn’t just the tank.  It was a wholesale refusal to have anything that resembled a campaign strategy. Dukakis, who essentially narrates his own political decline, admits as much in this excellent documentary.

“We didn’t do what, I’m sorry to say, you have to do in these campaigns, and that’s one of the great lessons of ’88, sadly, and that is you’ve got to anticipate an attack campaign and you’ve got to have a carefully thought-out strategy for dealing with it in advance of when it happens,” he said. “Preferably one that frankly turns it into a character issue on the guy that’s doing the attacking.” (WashPo)

“The 2016 Democratic race looks similar to the 2000 primary, when Al Gore had a lot of endorsements, a national polling lead near 20 percentage points and a similar Iowa advantage and trailed liberal challenger Bill Bradley by a few percentage points in New Hampshire. Gore ended up pulling away in Iowa and winning New Hampshire and every primary afterward. The weight of the party was too much for Bradley to bear, as it may be for Sanders.

Or maybe the past will not be predictive. Sanders, like Trump, may end up proving that support from party officials doesn’t mean what it used to, especially in the early contests. We’ll just have to wait and see.”  (538.com)

“He is strongest among Republicans who are less affluent, less educated and less likely to turn out to vote. His very best voters are self-identified Republicans who nonetheless are registered as Democrats. It’s a coalition that’s concentrated in the South, Appalachia and the industrial North, according to data provided to The Upshot by Civis Analytics, a Democratic data firm.” (NYT)

Then there’s this take on it – “One way to understand Trump’s longevity is to look more closely at his supporters. Trump’s backers tend to be whiter, slightly older and less educated than the average Republican voter. But perhaps more importantly, his supporters have shown signs of being misinformed. Political science research has shown that the behavior of misinformed citizens is different from those who are uninformed, and this difference may explain Trump’s unusual staying power.” (538 Politics)

“Real estate magnate Donald Trump led the top of a national poll of Republican voters released Wednesday morning while his rival retired neurosurgeon Ben Carson, who was once battling for first place, fell to third place.” (Behind Rubio at 17%)

But check this out! – “Trump and Bush top the list of candidates a Republican voter “would definitely not support” at 26 percent and 21 percent, respectively.”

“Sen. Ted Cruz (R-TX) trails Donald Trump by just two points among Iowa Republicans, showing the senator closing in on the real estate in the key primary state, according to a poll released on Tuesday by Quinnipiac University.”