Trump. He announced his campaign by insulting 17% of the US population. He called hispanics rapists and criminals, and wants to build a wall between the US and Mexico. That is what this psychopath built his campaign on. This is reason enough to not vote Trump. But there’s more! He retweets white supremacists, wants to ban all Muslims from entering the US, and has a terrible, awful spray tan. Trump also has no political experience, and when asked about his plans, he provides no detail. His responses are often just, “It’ll happen, don’t worry.” In our nation, we’ve had a black president and many white presidents. Hopefully we never have an orange president (The spray tan really is AWFUL) with terrible ideas like Trump. 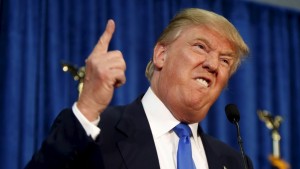 Trump, Rubio, and Cruz locked in Polls in Oklahoma!

Democrats also have a tight race. Clinton had 40% with Sanders trailing by 9%. Undecided had taken a lot with 29%. As the results are coming in, Clinton is the frontrunner with more than half the percent of the votes. She has 50.2%. Sanders is behind with 44%.

These two candidates are dominating Super Tuesday so far. Hillary Clinton has won a majority of the states, and Donald Trump has done the same. Both are looking really good so far. Trump has won Tennessee, Georgia, Alabama, and Massachusetts and Hillary has won Alabama, Georgia, Tennessee, and Virginia. Bernie Sanders has only won Vermont so far. Hillary may be crushing Sanders, but even if she won every delegate up for grabs tonight, she would not win against Sanders yet. Also, Cruz may have to drop out if he does not win his home state of Texas. 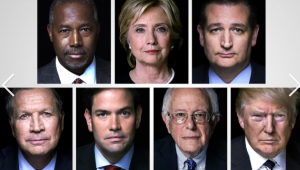 Colorado overall plays a very minor part in the election process. On the night of Super Tuesday, Hillary Clinton is predicted to win the Colorado Democratic Caucuses. There are 66 delegates available this year, so it will play a minor part in becoming president for a candidate.  But, those 66 delegates could be life or death for a losing candidate. As it stands, Hillary Clinton has raised $2,142,095, and Bernie Sanders has raised $672,999. The odds look like they are in Clinton’s favor, so maybe Colorado will be chanting, “Fighting for us!” at the end of the night.

In Massachusetts, the vote is heating up.  47% of the vote so far for the republicans have gone to Donald Trump, compared to only 16% of the vote going to the person in second place, Marco Rubio.  For the Democrats, Hillary Clinton has 55% while Bernie Sanders has a much smaller 38%.  In the exit polls, 66% of the people who want people to “tell it as it is” voted for Donald Trump.  On the Democratic side, 67% of youths in this state vote for Bernie Sanders, while 63% of the women over fifty vote for Clinton.  Back in the 2008 election, Hillary Clinton had the same winning and losing demographics, and she won Massachusetts, so it seems that history might repeat itself with this election.   Something interesting is that 20,000 people from the Democratic party left and went to the Republican party.  Many of these same people voted for Donald Trump, so many people are suspicious that they may have only voted for Trump so that he would lose the General Election.  This seems like a very easy victory for Donald Trump and Hillary Clinton.

For the Republican side the New Hampshire polls were not the outcome.  In the polls it showed Marco Rubio in second place but he ended up with 5th place.  John Kaisich and Jeb Bush both surged ahead in New Hampshire getting second and third.  Even though they did not get anywhere close to Donald Trump they will go home feeling like winners.  Ben Carson is in second to last place for the people that are remaining.  Carson is only ahead of Gilmore who has 0.1%.  Carson is not looking good right now.  After a win in Iowa Ted Cruz gets 4th place in New Hampshire.

On the Democratic side Bernie Sanders dominated Hillary Clinton.  Since Sanders was the governor of Vermont he was loved by Vermont and neighboring states.  It was clear from the beginning that Sanders would win Iowa.  Sanders is in good shape to take the nomination for the Democrats. 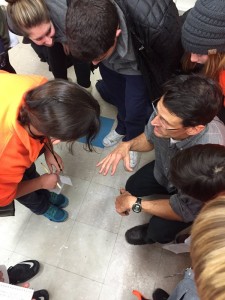 I had to smile. I was so thrilled to hear it. A van full of 6th grade boys talking tax policy. Yes, you heard that right. Tax policy. I mean, what do 6th graders know about this topic? As it turns out, a lot. Well, a lot more than most people. I was surprised, but then again I wasn’t. They weren’t exactly ordinary kids. They were all members of KidUnity, an after school leadership development program in Los Angeles that focuses on civic literacy, critical engagement, and community action.

We had just left the Jordan Creek School cafeteria in Polk County, Iowa. There, we witnessed a Democratic Party caucus; saw Bernie Sanders and Hillary Clinton supporters try to persuade undecided voters to side with them; watched each side choose its own delegates; and listened to those delegates introduce themselves and talk about what political involvement means to them. It was fantastic to witness this time-honored civic exercise–ordinary people engaged in a vigorous, respectable debate about the issues that affect our everyday lives. They were practicing what Democratic presidential candidate Bernie Sanders had recently advocated to KidUnity participants when we saw him in the lobby of our hotel. Sanders told them to talk to one another about the issues; to engage their friends and neighbors; to think critically about things that matter to them; and to remember that politics is “serious business.” It was the kind of civics lesson a textbook cannot provide.

So the boys were talking about tax policy. One advocated a flat tax. Another said that was unfair to the poor; he suggested wealthy citizens should pay more. Another suggested there should be no taxes at all. That was followed by a flurry of guffaws and a pointed rebuttal: taxes pay for things we use everyday. As a history professor and political junkie, I was in heaven. Never mind that at one point they even sang the civil rights song We Shall Overcome. (Pure joy for this civil rights historian). But I digress. The point is they were having a serious conversation about important policies that affect our lives. 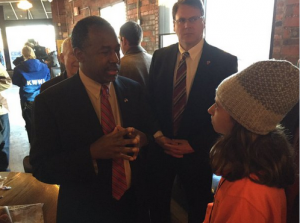 This was one of many inspired moments in my brief journey with KidUnity that I felt lucky to witness. I saw KidUnity cub reporters shake aside any fear, insecurity or bashfulness and elbow their way to the front of a press gaggle to ask candidates hard questions. It was an absolute delight, for example, to see Ben Carson squirm a bit when a smiling Sophia asked him how he would deal with ISIS if he became president. I’m sure he did not see that question coming from a 12-year-old. 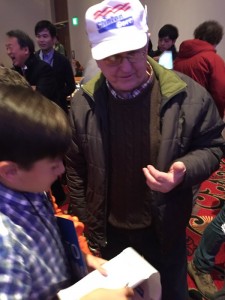 I loved watching Will ask an elderly Sanders supporter sporting a vintage Clinton/Gore campaign hat why he backed a Clinton in 1992, but not now. Even better was watching as the kids earnestly listened to his answer.  Or how about when a handful of kids sat down at a campaign office and made cold calls to potential caucus-goers? Incredible! They were thrilled when a caller responded positively and disappointed if they couldn’t get through. And I really couldn’t get enough of the joyful, infectious bouncing and dancing KidUnity members displayed at the Sanders after-caucus party, which they nearly turned into a pre-teen dance party. I may have suggested they start a Soul-Train dance line, but given their age, they just looked at me with confusion and kept dancing. 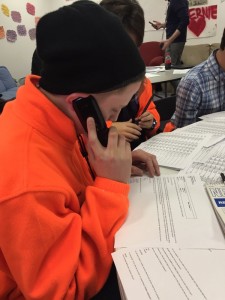 Textbooks can tell us why voting matters and how community engagement and critical debate is necessary for the democratic process to work. But going to the Iowa Caucus, meeting the candidates and their supporters, talking with them about their ideas and thoughts, and being part of the excitement and the frenetic energy that goes into organizing and campaigning was something entirely different. It was the difference between telling kids about the process and showing them how it actually works. It is what inspired education looks like.  Experiential learning is transformative for everyone involved. I can’t wait to see what KidUnity does next! 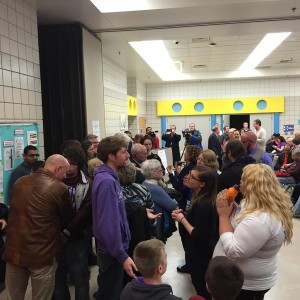 The Iowa Democratic Caucuses are  a little different from the Republican Caucuses, and from primary voting. In the Democratic Caucuses,  you first  go to a certain corner of the room to show support for the person you want to win the Caucus. In the first round at Jordan Creek Elementary, Hillary Clinton received 117 votes, and Sanders received 84. That was  a difference of 33. There were also 14 undecided.

After, there is a 30 minute convincing period, where you try to get the undecided to come to your side. You can also try to get people from other candidates to come over to the side you support.

In round two, Clinton received, 130, and Sanders received 85. The difference was then 45.

The delegates join together and they officially vote.  They decide the real winners of the Caucus.